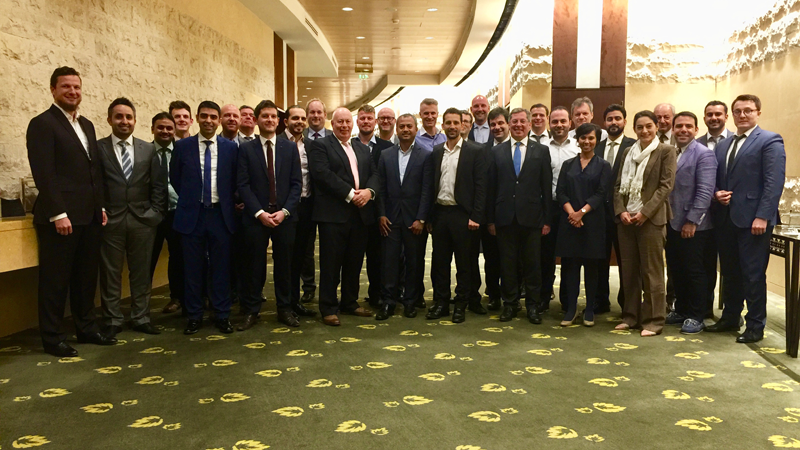 Brian Suggitt’s working life has been largely dedicated to the HVAC market. He has been working within the Middle East for over 30 years. Suggitt has headed up and developed major international companies in Saudi Arabia and Dubai including American Air Filter (AAF), Dorma Automatic Doors, Colt International and, for the last three years, Systemair in the Middle East. During his tenure with AAF, Suggitt was Chairman of the Riyadh Group of British Businessmen, Construction Division, working closely with the Embassy and various Government departments and legislators.

‘Having such a remarkable experience and expertise combined in our chairmanship is very positive’, states Markus Lattner, Director of Eurovent Middle East. ‘Brian Suggitt, Michel Farah, Georges Hoeterickx, and Matthias Kasprowicz are four highly respected personalities within our industry. They possess a long-term experience, and an in-depth knowledge on the local culture, regulations and specifications affecting the HVACR industry throughout the region. We look forward to a good teamwork in supporting our joint industry ideals.’

While Suggitt is taking on the overall lead, he will also head the ‘air-side’ working group. Michel Farrah will lead the ‘cooling and refrigeration’ area. Matthias Kasprowicz is going to be responsible for the overall communication efforts of Eurovent Middle East, while Georges Hoeterickx is going to manage the trade relations between the European Union and Middle East. The next general meeting of Eurovent Middle East is targeted for April in Kuwait.

“The establishment of Eurovent Middle East is important and timely as the region moves towards energy efficient demands and targets of year 2020, 2030 and beyond. It provides an essential platform to work as a non-commercial body to help improving awareness on standards, product quality, efficiency and sustainability.

My objective is to utilise my many years of experience within the Middle East and the HVAC industry, as Vice-Chairman of the Group and on behalf of the Group, to assist policy-makers and regulatory bodies within the region to establish European quality and reliability standards as the norm – and as a basis to enhance sustainable and energy efficient products and programmes in line with governmental directives. This would enable all stakeholders, from developers to end users, to avail themselves of tested, certified quality products meeting recognised and accepted standards.”

“The establishment of Eurovent Middle east issue group comes at a time where government strategies in the region are leading a shift towards higher efficiency systems and better indoor air quality in buildings including the increase use of renewable energies. With the high-energy impact of air-conditioning, ventilation and refrigerating systems in building estimated around 70% of the total building energy consumption, the Eurovent group members can play a major role in supporting the local government efforts since it consists of manufacturers committed to quality and to sustainability following high-level standards.

On a personal level, I am honoured to take this position to help build synergy between the members of Eurovent Middle East, the market stakeholders and the local authorities aiming at the increased awareness of European and international norms and at working together to enhance local regulations in a way that will bring the quality of products introduced in the market to the level that it can contribute effectively to lower carbon emissions while maintaining sustainable comfort levels.”

“In a region where life without HVACR would never been developed to how it is today - in such a region it is even more important to guarantee the highest standards for a healthy Indoor Environment. Clean Air and IAQ is a priceless legacy and the responsibility of all of us. We all know that in the Middle East the quality standards are not yet at its best and it is still a long way to reach highest quality standards in HVACR. With the establishment of Eurovent Middle East, another milestone towards a healthy and comfortable IAQ was reached and our efforts to promote highest European standards in the market can be joint now more efficiently.

Already for several years, I have been working extensively on the matter of creating awareness about the importance of clean and healthy air to the region and the impact of bad air to our health. Therefore, it was just a logical consequence to take this position at EUROVENT Middle East. The legacy of Mr Trox – ‘The human being is the yardstick and his well-being is our goal’ – will now be united with the efforts of leading European manufacturers and the Eurovent Middle East Association.

I am very excited and looking forward to a great cooperation with Eurovent and all participating manufactures to reach a common goal – to reach a sustainable, healthy and safe indoor climate.”

Photos of the Chairman and Vice-Chairmen.zip